Why use nitrogen in tires

The evolution of passenger tire in general and pneumatic tire in particular has spanned many centuries. Early records described the first tires as bands of leather or metal that were placed on wooden wheels of carts and wagons to reduce vibration and improve traction. After the invention of bikes, bike tires filled with water were created but soon became unpopular due to control difficulties. The discovery of rubber vulcanization gave rise to solid rubber tires and it was not until then that the invention of pneumatic tire materialized. This type of tire that is typically filled with regular or compressed air has been in existence for more than 150 years. Though the traditional pneumatic tire has proved to be extremely durable and efficient, it is now undergoing a major change that is likely to have enormous complications for both tire manufacturer and user. That change is the increasingly common practice of filling tires with nitrogen instead of air. Garages and tire dealers ceaselessly market the new method as a solution that can enhance vehicle performance, improve fuel economy and lengthen tire life. So why use nitrogen-based solution while virtually every auto repair shops can offer a free air tire refill, and it is common knowledge that as many as 78 % is what percent of the air is nitrogen?

What's the difference between nitrogen and air

Nitrogen is a chemical element with symbol N and atomic number 7 in the in the periodic table. In its gaseous form, nitrogen is colorless and odorless and is found in large quantity in the atmosphere. Though one of the most important building blocks of life and constituting 3 % of human body by mass, nitrogen does not directly support life, hence its name. Nitrogen is derived from the Greek word πνίγειν meaning "to choke". Solid nitrogen can be found in many useful compounds, such as ammonia, nitric acid and organic nitrates, the last of which are important ingredients of propellants and explosives. On burning, exploding, or decomposing, those compounds will release large quantity of nitrogen gas.

Air is made up of numerous gases. By volume, dry air contains 78 % nitrogen, 21 % oxygen, and the remaining 1 % other gases. At low attitudes, nitrogen is slightly lighter than air. It can be deduced from the main components of air that nitrogen already makes up a large proportion of air, so why fill tires with nitrogen? What ends can be achieved by doing so?

Benefits of nitrogen in tires 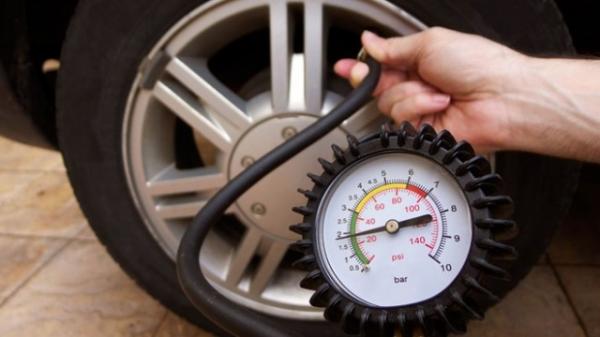 Air in the tires gradually migrate through the rubber, a process known as permeation. Permeation is responsible for pressure loss and a host of other tire-related problems, such as underinflation.

Nitrogen is among the least active gases in the permeation process. The molecules that constitute the chemical structure of nitrogen are relatively large, which makes the gas less likely to migrate through tire rubber and subsequently reduces the likelihood of tire deflation. Some calculations prove that nitrogen seeps through a tire three to four times more slowly than oxygen. 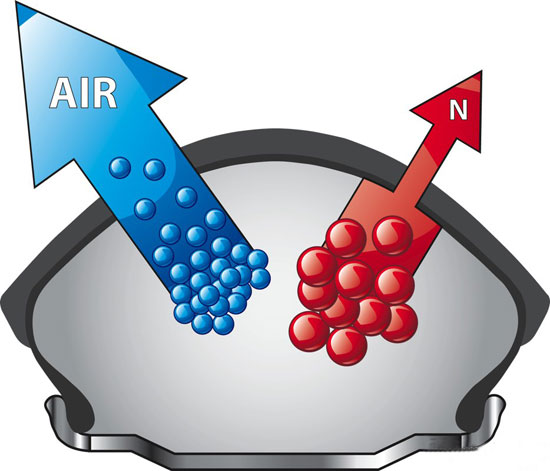 Besides, nitrogen is more resistant to temperature changes than air since temperatures generally have weaker effects on the molecular density of nitrogen than on other gases found in dry air, notably oxygen and water vapor. This property plays a key role in keeping tire pressure stable in the long term.

Some elements found in regular air can be attributed to premature tire aging. Oxygen, the second most abundant gas in dry air, can lead to oxidation, a process that inflicts strong damage on steel and rubber. That is to say, oxidation poses a danger to components of the tire and even the wheel. Meanwhile, water vapors are responsible for corrosion of mental components.

Even compressed air may be mixed with small amount of oil and particulate that is as harmful as oxygen and moisture.

On the other hand, due to its non-reactive nature, pure nitrogen cannot corrode the tire components and, therefore, prolong the time the tire can be in service. Moreover, its low susceptibility to temperature fluctuations can enable the tires to reduce running temperatures.

As mentioned above, nitrogen-filled tires are better at pressure retention, which certainly comes as a relief for drivers who are exasperated with the repetitive task of checking their air pressure.

According to some study, filling tires with nitrogen may help reduce the chances of underinflation which accounts for nearly 90 percent of cases of tire bursts, ensuring driver to have a more satisfactory travel experience.

It is believed that nitrogen tire inflation can improve steering, handling and braking efficiency as it keeps tires fully inflated for a longer duration.

Cost is another important factor in the nitrogen vs air discussion. It is showed that nitrogen-filled tires are easier to arrive at and maintain the right pressure, a major contributor to good fuel economy.

Lack of nitrogen in tires

The cost of filling new car tires can range from $70 to as much as $179. On existing tires, it normally costs $30 per tire to drain air and $5 to $7 to refill with nitrogen. Though more expensive than air refills at first glance, nitrogen refills are not required as regularly and may be regarded as a reasonable choice in the long term. 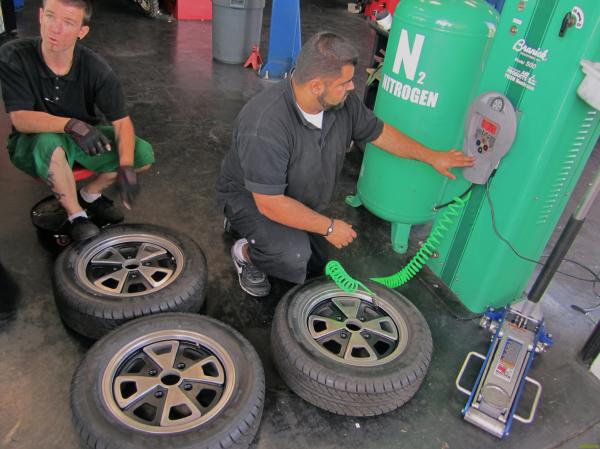 Nitrogen service is available at many gas stations, tire stores and auto repair shops. Since nitrogen must contain no more than 7 % impurities to be effective, a previously air-filled tire requires to be deflated and filled with nitrogen several times to purge of as much air as possible. This is one of the reason why conversion from standard air to nitrogen might be not universally affordable. But an upside is that the quantity of nitrogen that should be pumped into tires is the same as with regular air.

Does the nitrogen in the tires save fuel? 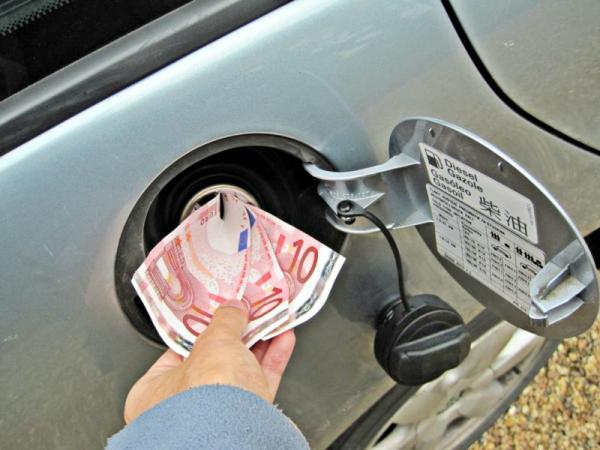 Yes, in the sense that it can lower vehicle fuel consumption. According to EPA data, underinflated tires can decrease gas mileage by 0.3 percent for every 1 psi drop in pressure of all four tires. As mentioned above, nitrogen in tires can help prevent underinflation, which means that using nitrogen-filled tires will help improve fuel efficiency. It is estimated that filling car tires with the gas can improve gas mileage approximately 10%. Of course, it is recommended that you should still check your tires on a regular basis to ensure that your vehicle tires always have proper pressure.

Nitrogen is neither flammable nor reactive, so it does not support the combustion of other materials. To put it simply, nitrogen is not a fire or explosion hazard. However, it must be noted that inhaling a large amount of nitrogen mixed with little oxygen can lead to asphyxiation or suffocation, and that the two gases cannot be distinguished by smell or color. Therefore, any process involving nitrogen should never be handled in closed spaces. But most importantly, while nitrogen is basically harmless in its gaseous form, liquid nitrogen will cause instant and intense frostbite or cryogenic burns if coming into direct contact with human skin.

Can I mix air and nitrogen?

If you are afraid that filling tires with both air and nitrogen at the same time will compromise the benefits of nitrogen in tires, the answer is that it is perfectly acceptable to do so. While a mix of air and nitrogen is undoubtedly not as beneficial as pure nitrogen, it still contains smaller amounts of corrosive agents such as oxygen and moisture than regular air. If your car tires deflate unexpectedly and nitrogen refills are not available, you can easily give them conventional air refills. In order to enjoy the full benefits of nitrogen-filled tires, however, it is imperative to extract air from your tires and replace it with pure nitrogen as soon as possible. For references, nitrogen must be 93 to 99 percent pure to be fully effective.

Can I use nitrogen in winter?

Though nitrogen-filled tires are subject to higher pressure loss due strong temperature changes throughout winter and that you will be required to add pressure during such times, they are still more reliable and have more consistent pressure than their air-filled counterparts. The benefits that the nitrogen solution has in other seasons will remain largely intact, including better tire life, enhanced performance and improved fuel economy.

As nitrogen is an inert gas and does not support combustion whatsoever, it is the preferred choice for commercial aircraft. During take-off and landing, the plane moves at very high speed, resulting in enormous friction between its tires and the run-way. Nitrogen-filled tires ensure control over the intense heat and pressure produced during that process. 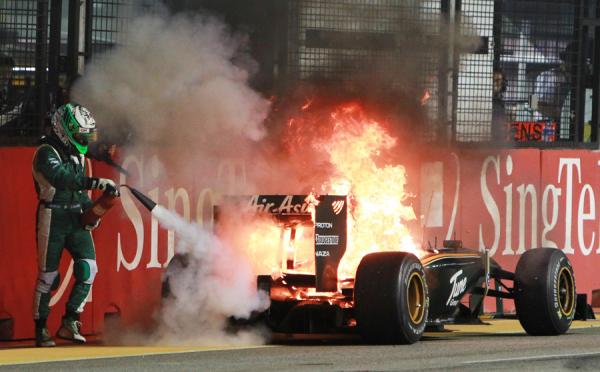 For the same safety reason, professional racing teams always rely on nitrogen for tires. But their preference also stems from the need for a technical advantage. The capacity of nitrogen to withstand high heat and to enhance vehicle performance will give any racer a tremendous competitive edge.